Due to recent changes in Google's security policies for third-party apps, we've suspended support for our Gmail connector until further notice. In the meantime, you can still integrate Gmail with Pleexy by using Outlook.com as proxy. Kindly refer to our guide on how to add your Gmail account to Outlook here.

After you connect Gmail as a source service, use Pleexy’s customization options to integrate Gmail and Todoist exactly the way you want. First, navigate to the page where you can change settings:

Source means the Gmail labels where Pleexy will pick the tasks to add to your Todoist. Pleexy only takes emails marked with stars from your Gmail account. Type the names of the Gmail labels you want Pleexy to check for starred emails.

Next, set a date range to tell Pleexy to ignore emails that you consider out-of-date. For example, if you enter ‘60,’ Pleexy will ignore emails marked with the star label that haven’t been updated in the last 60 days.

Pleexy combines your settings for these two filters. For example, if you type Inbox and enter 30 days, Pleexy will search for starred emails that meet both requirements:

Destination means where Pleexy will create tasks in your Todoist. Click the drop-down menu to select the Todoist project to use.

Note: If you want Pleexy to create tasks in a new Todoist project, log in to your Todoist and create the new project there. Back in your Pleexy settings, in the project drop-down menu, click Refresh to update the list of projects. 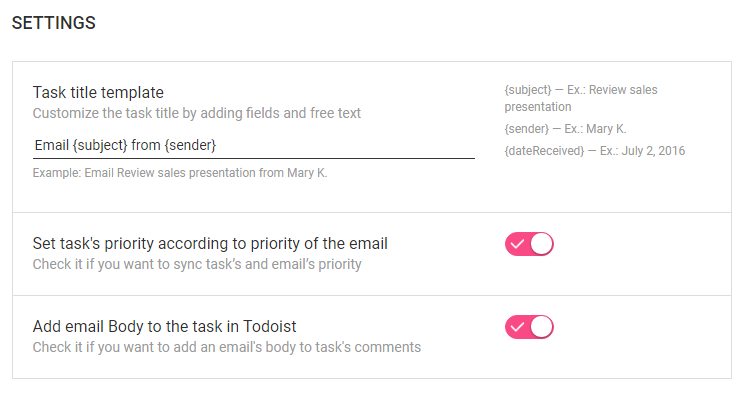 In the Task settings, you can specify how Pleexy will name and group tasks in your Todoist.

Under Task title template, use macros to customize how Pleexy names your tasks. For Gmail integrations, three elements are available for task names: {subject}, {sender}, and {dateReceived}.

Note: If you manually edit a task title in Todoist, Pleexy won’t update or change your edited title.

And you can toggle-on Add email’s Body to the task in Todoist if you want Pleexy to add the body of your Gmail emails to task comments in Todoist. 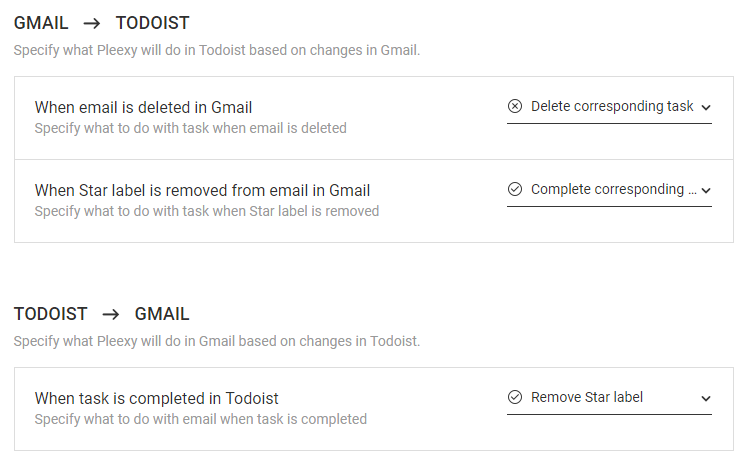 Action settings let you control what happens in Gmail and Todoist when you delete and complete tasks—on both sides of the integration!

First, tell Pleexy what should happen in Todoist when you delete an email in Gmail. Click the drop-down to select one option:

Second, specify what should happen in Todoist when you remove the star label from an email in Gmail. Click the drop-down menu to select one option:

Third, tell Pleexy what should happen in Gmail when you complete a task in Todoist. Click the drop-down menu to select one option:

Don’t forget to scroll down and click Save changes when you’re finished customizing!