After you connect Evernote as a source service, you can customize your Evernote and Wunderlist integration exactly the way you want. First, navigate to the page where you can change settings: 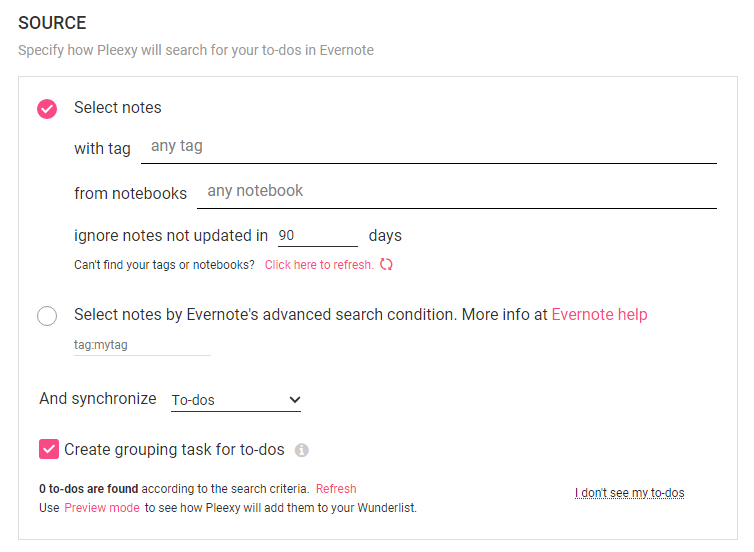 Source settings let you configure how Pleexy searches for notes and to-dos in Evernote. You have two options: Select notes with tag and from notebooks or Select notes by Evernote's advanced search condition.

Select notes with tag and from notebooks allows you to filter notes by tags, notebooks, and last update.

Pleexy combines your settings for these three filters. For example, if you enter the tags #chore and #favor, select the notebooks Family and Neighbors, and enter 30 days, Pleexy will search for notes that meet all three requirements:

Tagged with #chore or #favor

+ Located in notebook Family or Neighbors

In the Source section, you can also choose to synchronize your to-dos or your notes only. If you select Notes only, Pleexy will create tasks for each matching note in your Wunderlist.

If you choose to synchronize your to-dos, you can also decide whether to group your to-dos. In this case, Pleexy will group all to-dos from one note under a single parent task in your task manager. Specify how parent tasks will be named.

Destination settings define how Pleexy creates tasks in your Wunderlist. You have two destination options: 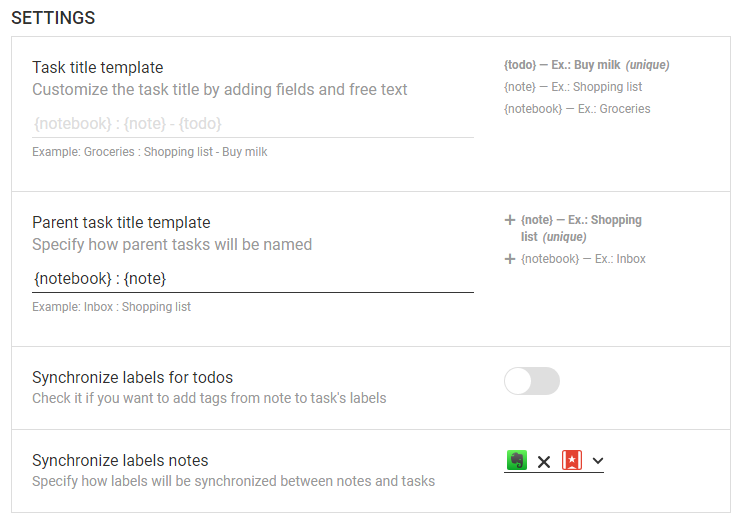 In the Task settings, you can specify how Pleexy creates, names, and synchronizes tasks and task attributes.

Under Task title template, use macros to customize how Pleexy names your tasks. For Evernote integrations, three elements are available for task names: {notebook}, {note}, and {todo}.

If you chose to synchronize and group your to-dos in the Source settings, you can use the {notebook} and {note} elements to create a macro for naming parent tasks under Parent task title template. Pleexy will list all todos for each notebook and note under a single parent task. For example:

You can also toggle-on the Synchronize labels for todos option. If you select this option, Pleexy will add tags from your notes to the task labels.

Finally, you can specify how Pleexy should synchronize labels between your notes in Evernote and your tasks in Wunderlist: 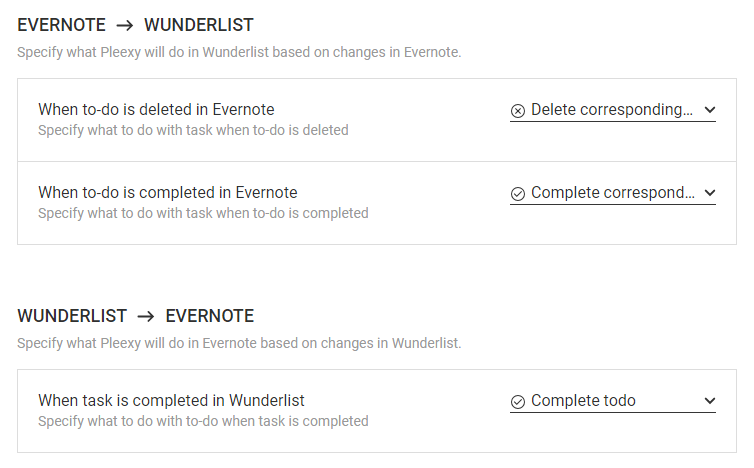 Actions settings let you control what Pleexy will do when you change, complete, or delete tasks in Evernote or Wunderlist—both sides of the integration!

First, tell Pleexy what should happen in Wunderlist when you delete a to-do in Evernote. Click the drop-down to select one option:

Second, specify what should happen in Wunderlist when you complete a to-do in Evernote. Click the drop-down menu to select one option:

Third, tell Pleexy what should happen in Evernote when you complete a task in Wunderlist. Click the drop-down menu to select one option:

Now you know all about your options for integrating Evernote with your Wunderlist! Don’t forget to scroll down and click Save changes when you’re finished customizing.