All Collections
Evernote Integration
Integrate Microsoft To Do with Evernote

Integrate Microsoft To Do with Evernote

Written by Pleexy
Updated over a week ago

Evernote Tasks are relatively new and their team hasn't made them available through their API yet. What we've done, and encourage our users to do, is to request this to be available in their public API through your Evernote account.

On your dashboard, select the Evernote connection card and connect your account. You can then customize Pleexy’s settings to integrate Evernote and Microsoft To Do exactly the way you want.

On this page, you can customize the connection's name. You can also adjust the settings for Source, Tasks, Destination, and Sync options. Let’s walk through your options for each.

Source settings let you configure how Pleexy searches for notes and to-dos in Evernote which will be converted into tasks in Microsoft To Do.

Pleexy searches your Evernote for to-dos or notes through either of the two methods: Pleexy or Evernote's advanced search.

If you choose the Pleexy method, you can filter your to-dos or notes by tag, notebook, and last update.

Pleexy combines your settings for these three filters. For example, if you enter the tags chore and favor, select the notebooks Family and Neighbors, and enter 30 days, Pleexy will search for notes that meet all three requirements:

In the Task template, you can specify how Pleexy creates, names, and synchronizes tasks and task attributes. 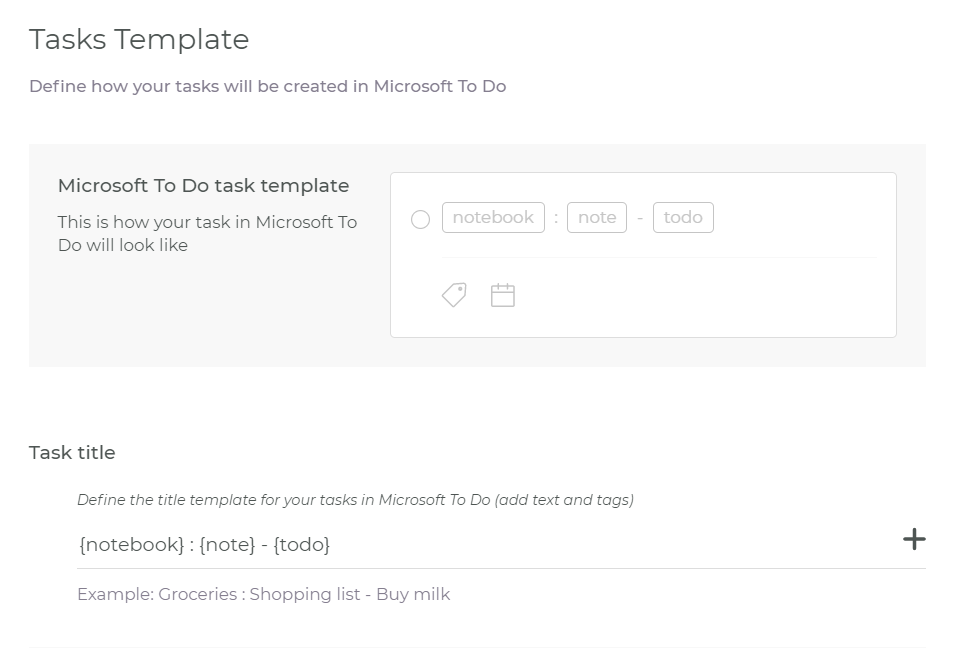 Under Task title, customize how Pleexy names your tasks in Microsoft To Do by adding text and selecting any of the given elements. For Evernote integrations, three elements are available for task names: {notebook}, {note}, and {todo}. If you chose to sync notes in your Source settings, you can only use {notebook} or {note} in the template.

As you change your task title template, Pleexy shows how your tasks will look in a live example above the template field. You can combine the macro elements however you want, as long as you get the formatting correct. Here are some ideas:

Note: If you manually edit a task title in Microsoft To Do, Pleexy won’t change the title in Evernote.

Synchronizing due dates and labels

If you toggle on Labels, Pleexy will add your tags from Evernote as labels to the task in Microsoft To Do.

If you chose to sync notes in your Source settings, you can further choose how labels will be synchronized between Microsoft To Do and Evernote. When a label is updated in one place, it will be automatically updated on the other end, depending on the options you've enabled.

If you'd rather not copy due dates and labels from Evernote to Microsoft To Do, simply disable these options.

Destination settings define how Pleexy creates tasks in your Microsoft To Do.

You have two destination options:

Sync options let you control what Pleexy will do when you complete or delete tasks in Evernote or Microsoft To Do—both sides of the integration! 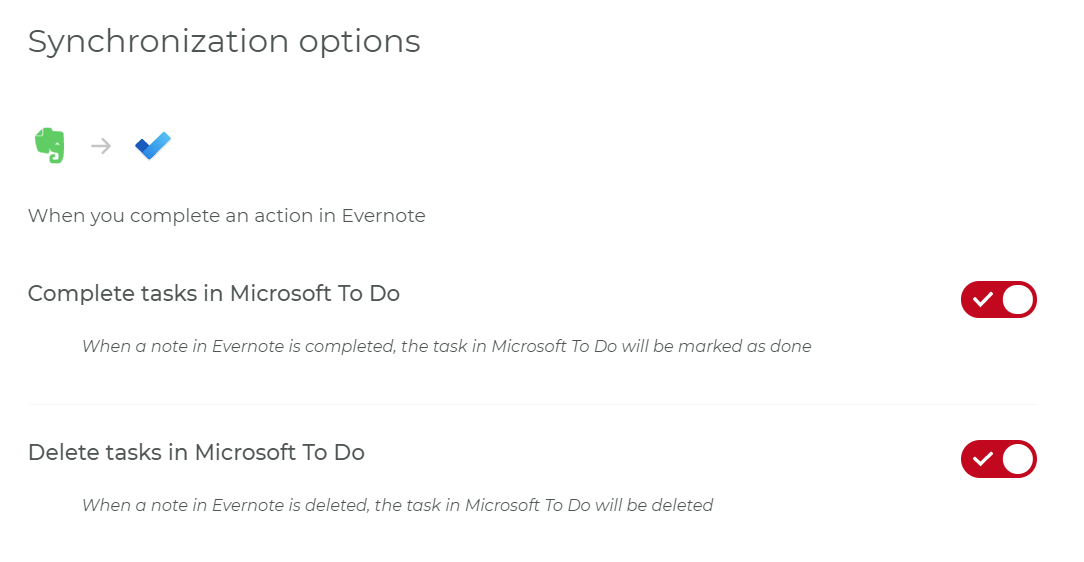 First, tell Pleexy what should happen in Microsoft To Do when you complete or delete a to-do in Evernote.

Next, tell Pleexy what should happen in Evernote when you complete a task in Microsoft To Do.

Now you know all about your options for integrating Evernote with Microsoft To Do! Don’t forget to click Save when you’re finished customizing.

Start your 14-day free trial
Did this answer your question?